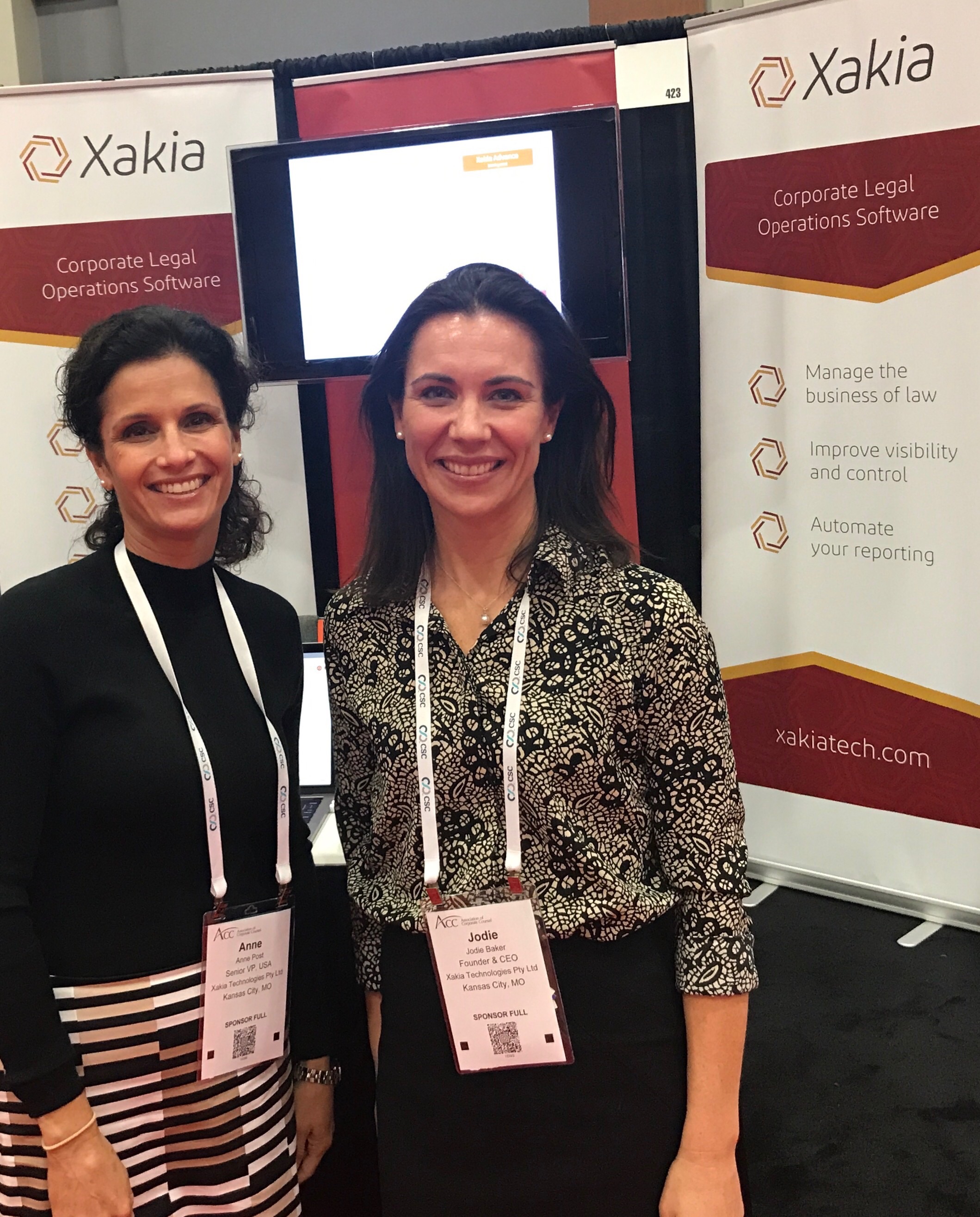 At the ACC Conference in Washington DC in October, there was no fewer than 19 sessions with ‘innovation’ themed content.

“Hello,” I would call out to the passers-by (later I would deliberately say “G’day” instead). They had an eye to the muffins, or perhaps the beer, as they hurried past, not recognizing the name or the product.

“Aussie Legal Tech,” I tried, and they paused slightly. Perhaps it was the unusual accent. Or the use of the word ‘Aussie’?

“Not many of us here,” I would joke with a broad smile, “so worth a look, right?” By now they were smiling, and reluctantly walked over to give us no more than 1 minute of their time. I had, after all, interrupted the need to quench a thirst.

“Aussies, hey?” they would ask. Perhaps they were bemused? Or thinking that they would be unlikely to work with foreigners. I wanted to reassure them that Xakia is a U.S. entity.

“Hello,” Anne said. Instantly, there was relief in the recognition of her mixed Colorado / Californian accent, and a smile.

“OK, show me what you’ve got.” And we had their attention.

As we demonstrated Xakia (pronounced Zakia), each person could not help but show their surprise at our software, even their delight – this was something they were actually interested in looking at. And then their indulgence became a genuine interest in corporate legal operations software.

Were we lucky that we had something different to make us stand out? Was the Australian origin of Xakia an advantage? Probably.

Anne and I are well aware of the uncomfortable relationship between delegates and vendors. As former lawyers, we had both once been the delegate rushing for a drink at the end of the day, not wanting to be disrupted from our busy conference minds.

It had been easy to consider ourselves innovative – full of ideas for changing the world – and yet look past vendors as little more than salespeople hired to spruik yet another product. At the time, we didn’t recognize that these vendors were often the very people who had taken the plunge to create something completely new – the innovators who had been spoken about in the many ‘innovation’ sessions being run at the conference.

We went forth and innovated, and now we stand on the other side of the sponsorship dollar, trying to show off our products.

If we thought that the ‘innovation’ part was difficult, this is even harder! Imagine a lawyer becoming a salesperson. Yikes.

Each day, Anne and I started at 7am and worked until well past 7pm before heading to a dinner with clients and other vendors. We did not let a single opportunity walk past our booth without looking at our product. We collected names and contact details, we smiled and laughed, and we were overjoyed by the support for Xakia. Each and every time, we felt like pests interrupting the ‘real’ reason people were at the conference. It was extremely difficult, but simultaneously affirming that our product was worthy of inspection.

The Australian contingent at the ACC conference were fantastic – about a dozen Australians, now scattered all over the globe, found their way to Xakia and then gravitated back to it again and again, bringing with them introductions and recommendations of our software.

Similarly, existing U.S. clients were keen to show their peers what we had to offer, and dragged other reluctant delegates to our booth. Again, the surprised delight that it was worthy of their inspection.

Were we lucky? Yes.

Were we exhausted? Absolutely.

What’s next? That uncomfortable post-conference call.

Thanks to all those who took the time to take a closer look at Xakia.

With Xakia your team can support your in-house Legal Department wherever you are!

Make the transition in just one hour.

Click here for a live demo with our team.