Make the Most of a Small Legal Budget 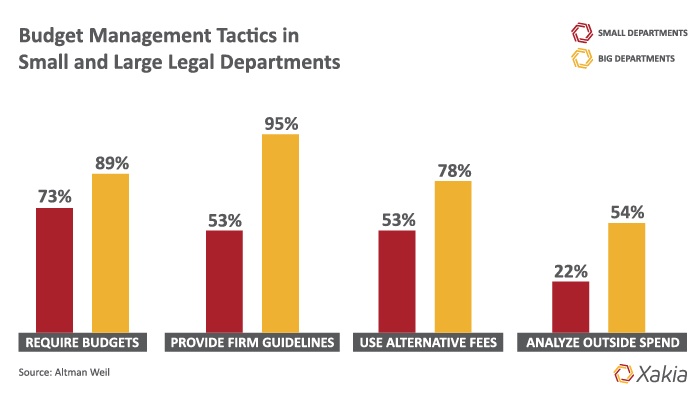 More money, more problems? For small Legal Departments, the opposite may be true: While their budgets may have fewer zeroes than their larger counterparts, the pressure to deliver with fewer people and fewer resources is huge.

The Association of Corporate Counsel defines “small” as an in-house team with no more than ten lawyers. Writing in its Value Challenge Practices for the Small Law Department guide, the organisation listed a number of challenges these teams face in budget management and the pursuit of value. Chief among them: With fewer lawyers, small teams are crunched to focus on “business as usual” work, so it’s hard to devote time to big-picture budgeting and value alignment projects.

We certainly understand the validity of that predicament. However, as we approach a new budget year, it’s worth looking at a few low-fuss tactics that could have high impact in 2019. One place to start: What are the bigger departments doing?

The Altman Weil chief legal officer survey shows a number of activities that Legal Departments have pursued for better budget management. When broken down by size, there’s a sizeable gulf between smaller teams and large teams:

Small Legal Departments are also far less likely to receive price reductions from their outside firms; 78.4 percent of large teams said they received discounts, while 50.2 percent of smaller teams did. On a related note, more than half (56.9 percent) of small Legal Departments said they did not feel they had enough buying power to negotiate effectively with their law firms; only a third of large teams felt the same.

As for buying power, don’t underestimate your leverage. In Altman Weil’s latest edition of Law Firms in Transition, 95.8 percent of managing partners said they believe that increased price competition will be a permanent trend in the marketplace. Law firms expect to compete on price. As the ACC states in Unless You Ask, an invaluable guide to outside counsel negotiations, “You are the urgency driver … You may not get everything you ask for. But unless you ask, you are almost guaranteed to get none of it.

Xakia is a seriously simple, secure & cloud-based legal matter management platform that removes the need for spreadsheets to manage your workload & deadlines.